Our partners from the parents’ association APEM have been talking to us for a long time about founding a vocational school for Ruli.

Vocational training had been neglected by the Rwandan state during the reconstruction of the educational system. But trained workers are urgently required. And studying is not the best solution for all young people.

We discussed together which professions should be trained and decided to start with works for house building. It has been important to everyone that in Rwanda women are also active in construction work.

After the charity run of Realschule Sรผd and Immanuel-Kant-Gymnasium in Bad Oeynhausen/Germany in 2010, we started to implement the project.

Strict state regulations had to be fulfilled. Rooms for theoretical lessons, practical opportunities, cooperation with companies, materials and above all qualified teachers were required.

It was not easy, it was more espensive than originally planned. But it worked.

At the beginning in 2013, girls and boys were trained as masons. They were instructed by good teachers, among them also a woman. 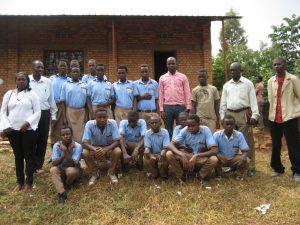 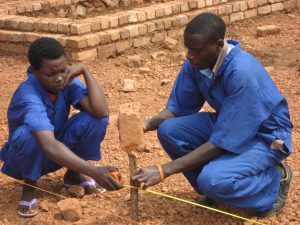 Later there were carpenters and joiners.

Thanks to a donation of the Pastoraler Raum WerreWeser welding courses are offered.

In January 2018 we could participate in the distribution of certificates for more than one hundred graduates of the ETR. The proud young men and women received their certificates in an impressive, but also very long celebration followed by an open day. Again and again they called their motto “Few words, more practices”. But not all successful students took part in the celebration. They worked in factories too far away from Ruli.

In October 2018 the students from the timber construction sector of the vocational School ETR in Ruli built furniture for three classrooms of the primary school Ruli. The exemplary project was financed by the pupils of the Realschule Hausberge through their participation in the Tagwerk campaign and by a donation from the “Minda cares” campaign organized by Minda Industrieanlagen GmbH in Minden.

In January 2019, six IKIRARO members visited Ruli to get a current impression of the situation. During a visit beginning of 2018 it became apparent that the toilets of the primary school are in urgent need of renovation. This was checked again during the trip at the beginning of 2019 and considered as a possible new project.

That might be again a practical task for the students of the vocational school ETR.

During the visit in January, however, that it was much more urgent to renovate the toilets of the vocational schoolย  first!

There was a risk that the school would be closed if the toilets were not renovated soon!

Supported by the Ikiraro association, these toilets have now been renovated – and the school continues to operate.